Home
/
Norway in Space
/
A Brief Overview
/
A Longer Overview

Norway is a small, but important space nation. From solar research to plants in space, Norway plays a part.

Norway has a long tradition as a space nation, in no small measure due to its northern position on the globe. Kristian Birkeland’s famous Terrella experiment in 1896 in which he created synthetic northern lights can be seen as the start of modern space activities.

He understood that it was the sun that caused the aurora borealis (as well as its southern-hemisphere counterpart, the aurora australis) and that particles from the sun interact with earth’s magnetic field and atmosphere. Thus the aurora and solar research led to the establishment of the rocket range on the north Norwegian island of Andøya, where the first Norwegian research rocket was launched in 1962.

Researchers from a number of countries now utilize this rocket range in their studies of the northern lights and the earth’s atmosphere and the facility is NASA´s most important launch facility for sounding rockets outside USA.

A research environment blossomed early in Norway and today Norway has one of the strongest solar research groups in the world. Norwegian scientists participated in the solar telescope HRTS (High Resolution Telescope and Spectrograph) that flew on the space shuttle Challenger in 1985.

More recently they played a central role in the successful SOHO mission - a large satellite based solar observatory including 12 different telescopes and instruments launched in 1995.

This was a collaboration between the European Space Agency and NASA in which Norwegian industry provided equipment and services to the tune of 80 million Norwegian kroner. 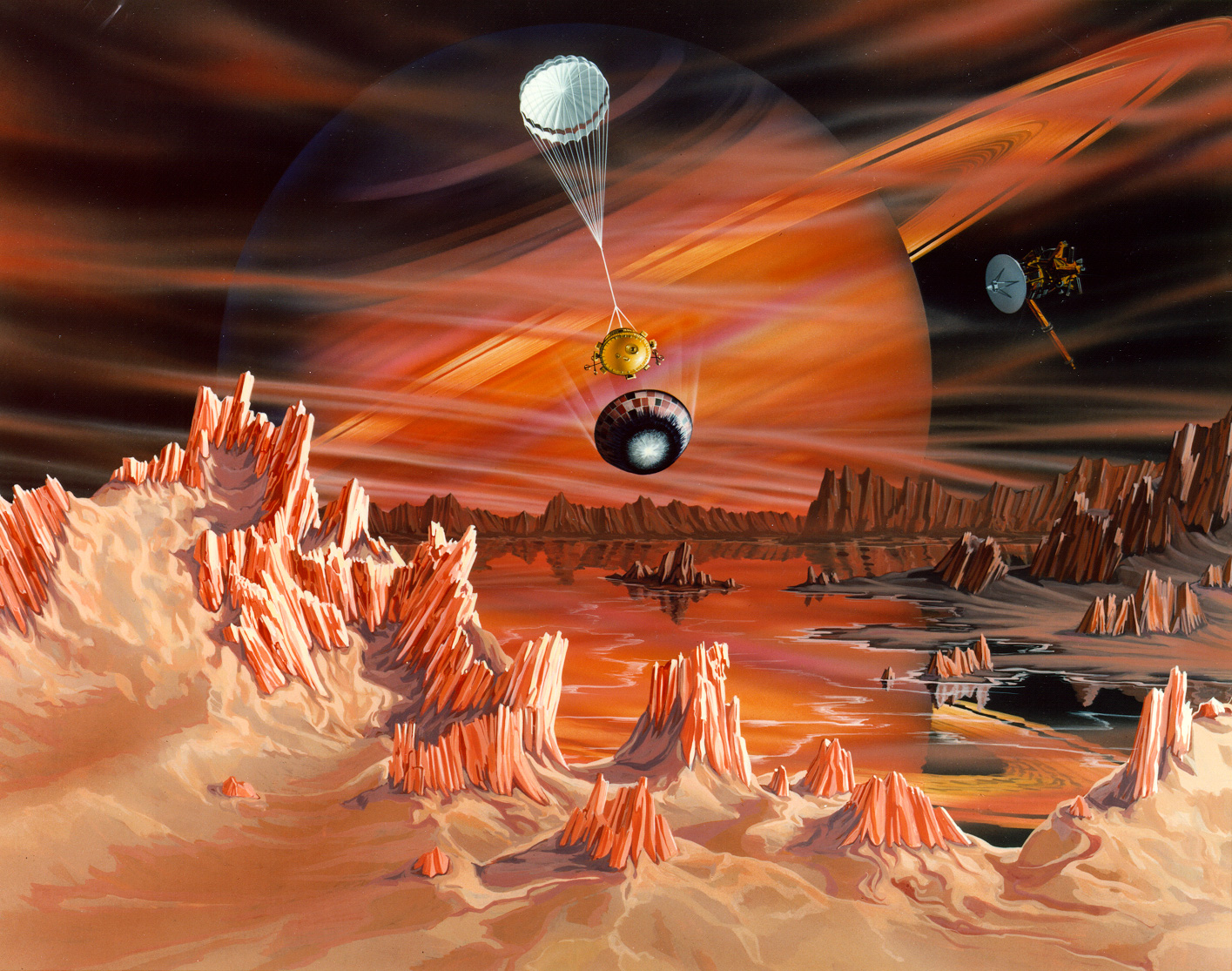 Illustration of the Huygens module landing on Titan, Saturn's moon. Cassini can be seen to Saturn's right. Ill: NASA/JPL.

One of the most daring space projects in history was the successful landing of the Huygens space probe on Saturn’s mysterious moon Titan and transmission of the first pictures from Titan’s surface. Huygens was mounted on the spacecraft Cassini, which is still circling Saturn.

Norway’s Kongsberg Defense & Aerospace (KDA) delivered the test equipment used during development and integration of Huygens. Moreover, the Norwegian Defense Research Establisment (NDRE) was responsible for one of the instruments aboard Cassini - as well as for instrumentation for ESA’s future Mars project, ExoMars.

NASA’s satellite SWIFT has been built in order to study gamma burst - the most violent explosioins in the universe. The x-ray camera aboard SWIFT was developed in cooperation with Gamma Medica - IDEAS outside Oslo.

Technology from this camera is also being used in breast cancer scanning and can discern smaller tumors that normal mammographic methods. The same principle is being applied in airport security controls.

The research and technology group SINTEF in Trondheim has developed the Multi-Component Trace Gas Monitor (ANITA) to monitor air quality on the International Space Station (ISS). The instrument was launched last summer on the space shuttle to detect whether the air might contain gases potentially injurious to the astronauts. 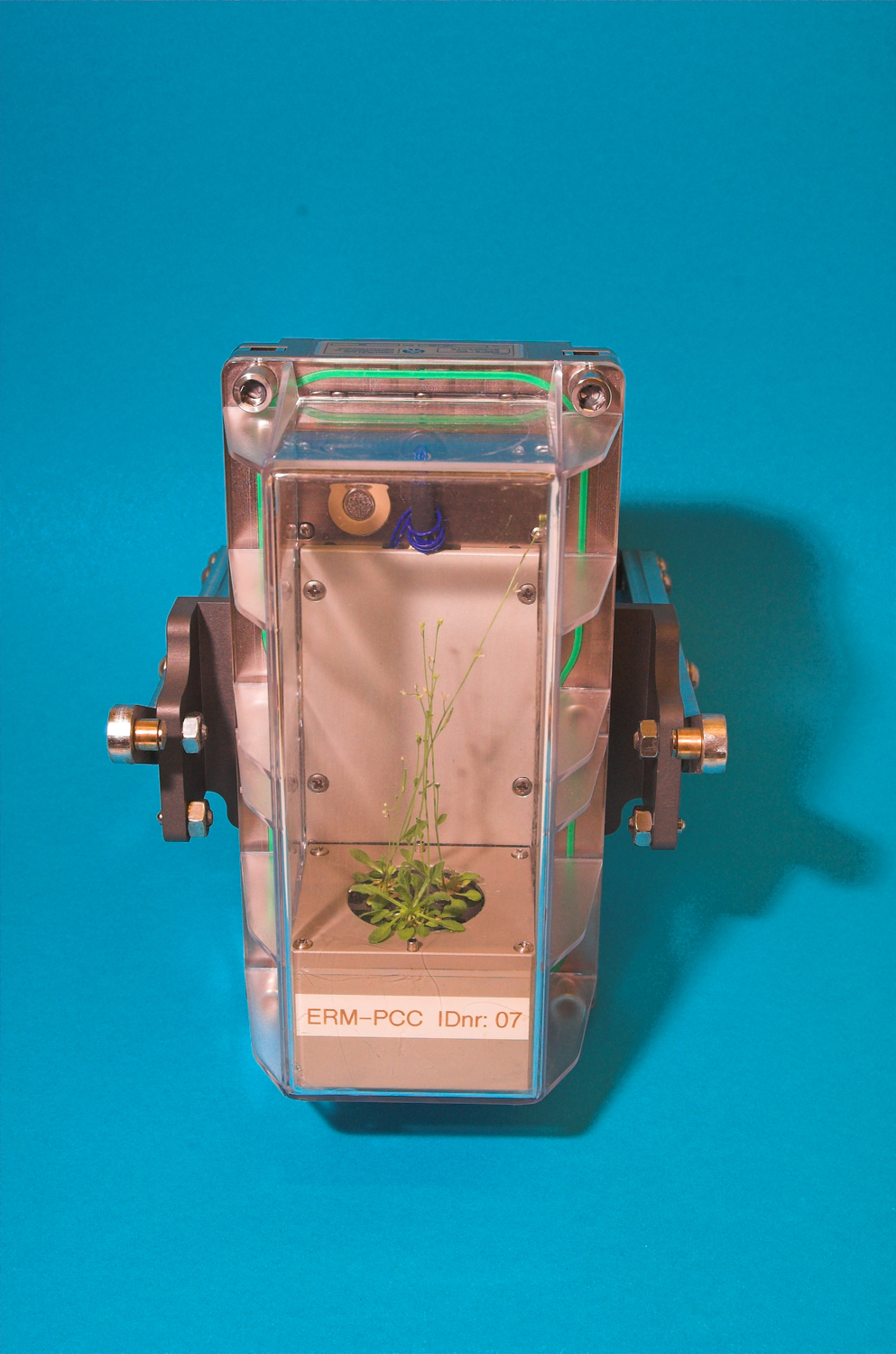 Experimental container with the flower Arabidopsis.

The international space station also contains a mini greenhouse with a number of plant cultivation chambers developed by Prototech in Bergen in collaboration with the Plant Biocentre at the Norwegian University of Technology and Sciences (NTNU) in Trondheim.

They cost 500,000 kroner apiece and can safely be said to be Norway’s most expensive flowerpots. If humans are going to be able to travel into space, they must be able to produce their own food. Therefore it is necessary to learn how plants thrive in the absence
of gravity.

Svalbard is one of the places on earth where the environment most resembles conditions on Mars. The area around Bockfjorden is unusually volcanic, with warm springs, ice and permafrost. The geology resembles conditions as they could have been on Mars in its childhood four billion years ago.

The Norwegian project AMASE (Arctic Mars Analog Svalbard Expedition) offers NASA and ESA unique possibilities for testing their future Mars rovers and instruments before they are sent to Mars. Even space apparel has been tested in Svalbard.

Many people equate space industry with the manufacture of parts for satellites and rockets, but the the largest part of the space sector, generating two thirds of the sector´s annual turnover, is telecommunication (transmission of television, telephone, pictures, and data via satellite).

Telenor is one of the leading providers of satellite communications. Norwegian industry also helped lead the way with satellite phones and, in 2006, developed the world’s first broadband satellite phone. These are frequently used by international journalists reporting back from remote places without cell phone coverage such as disaster areas and war zones.

Norspace in the town of Horten has found an industrial niche by building filters that distinguish signals from noise in satellites and Prototech is building the gilded boxes that contain the electronics. So most communications satellites launched today contain 100 kilograms of Norwegian electronics and even China purchases advanced electronics for their satellites in Norway.

When ESA launches their 59-meter-tall Ariane 5 rockets near the equator in French Guiana the two large side-mounted solid rocket boosters are held in place by lock-and-release mechanisms from Kongsberg Defense and Aerospace (KDA) and with accessories from Prototech.

The large bolts cost 100 million kroner to develop and can’t be made in an ordinary metal shop. Two minutes after firing the rockets have exhausted their fuel. Small explosive charges in the bolts crack them with surgical precision in the course of five-thousandths of a second.

The rockets are thereby pushed away from the main rocket by little rocket jets developed by NAMMO in Kongsberg Several of ESA’s research satellites have components from Norwegian industry, and Norwegian mechanisms for steering solar-cell panels or antennae are now in orbit around Venus and Mars.

In spite of a relatively sparse population of only 5.1 million, Norway is Europe’s second-largest country in area—that is, if you include our economic ocean areas and far-flung  islands. Within this area are huge amounts of valuable resources such as oil, gas and fish.

This large an area and relatively few people present us with geographic and climatic challenges that can only be satisfactorily solved with extensive use of satellites. These can monitor climate, ice conditions, vessel traffic and oil spills. Satellites also distribute TV broadcasts, phone conversations and data transfer. Furthermore, satellites provide ships, automobiles and people with positions so that we can navigate safely.

On Svalbard, Norway has the world’s biggest station for weather satellites in polar orbits. The satellite station is operated by Kongsberg Satellite Services (KSAT), and it also has antennae in Tromsø, Grimstad and at Troll Station in Antarctica. This makes them the world leader in retrieval of satellite data from polarorbiting satellites. Their biggest customer is NASA and NOAA and a large part of the date for the US weather services are coming down via Svalbard. 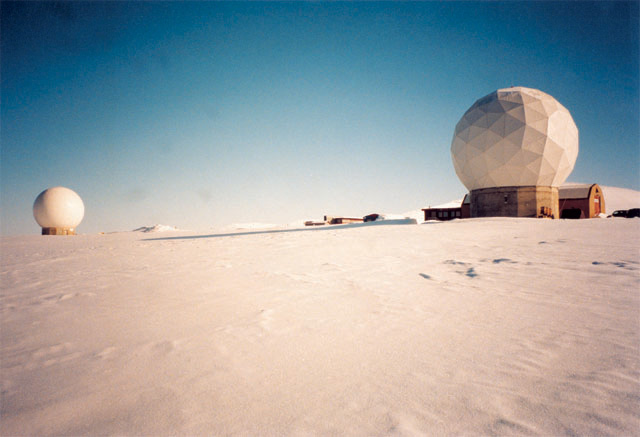 SvalSat at Platåberget outside Longyearbyen, Svalbard, has an ideal location for polar orbiting satellites.

Next time you se the weather presenter on TV showing some spectacular imagery of a hurricane from space there is a large chance this image travelled from space via Svalbard and Norway before being transmitted to USA. Norway led the way in utilizing radar satellites to detect oil spills from ships and oil installations.

Radar satellites can “see” at night and through cloud cover, making it possible to immediately see clandestine and illegal release of oil so that the coast guard can be alerted.

Radar satellites can also be used to monitor ship traffic far off at sea. In a few years Norway will start operating its own satellite for keeping track of all ship traffic in its economic ocean areas.  At present costal radio-stations can only detect identification signals from ships closer than about 40 nautical miles off shore.

Satellites also monitor natural phenomena such as volcanic eruptions, earthquakes, ocean currents and extreme wave action. Pictures from space can be extremely important when rescue operations have to be initiated after a powerful earthquake, especially if the catastrophe occurs in a remote location. Space pictures can also help to map algal blooms at sea - information useful to fishing fleets and fish farmers.

We are all used to receiving detailed and rapidly updated weather reports via the Internet and cell phones, something that would be impossible without satellites.

Climate changes and the environment are currently of top international concern. Satellites will become increasingly important for the surveillance of the Earth’s environment since they will be able to furnish uniform information of large areas.

The geographic advantages of Norway´s northern latitude for space activities is important, both to meet national needs and to provide services for international clients.