75 years after the United Nations was established, the organization aims to make the world a better place with the help of satellites. Norway plays a central role in this work.

The United Nations celebrated its 75th anniversary on the 24th of October 2020.

How does the organization use satellite data, and how can satellites help reach the Sustainable Development Goals of the 2030 Agenda?

In September 2020 Norway signed an agreement to purchase high resolution satellite images for up to NOK 400 million for the monitoring of tropical forests.

Used for many different purposes

These high resolution satellite images will be available for all stake holders in the international conservation efforts for tropical forests, both donor countries, receiver countries, independent organizations and private businesses.

The aim is to increase insights into and momentum for the conservation of the world's forests.

The data will be close to free of licencing and other limitations, and can be used for monitoring and follow-up in many different areas of developmental aid and international policy important to both Norway and the UN.

"The Norwegian satellite data agreement has long been of strong interest to the UN, and several of the large organizations within the UN Family, such as UNDP, UNICEF and UNHCR, are expected to use these data in their day-to-day operations," says Evie Merethe Hagen, Senior Adviser in External Relations and Strategy at the Norwegian Space Agency.

A central source for information

Satellite data are a central source of information for many UN organizations.

"The UN uses satellite data in their efforts for international human rights, in the work of the UN Security Council and the International Court of Justice, for climate change and environmental protection, for international conservation efforts on land, for monitoring conflict and refugee situations, for humanitarian disaster work, global and national efforts for health, education, and more", Hagen says. 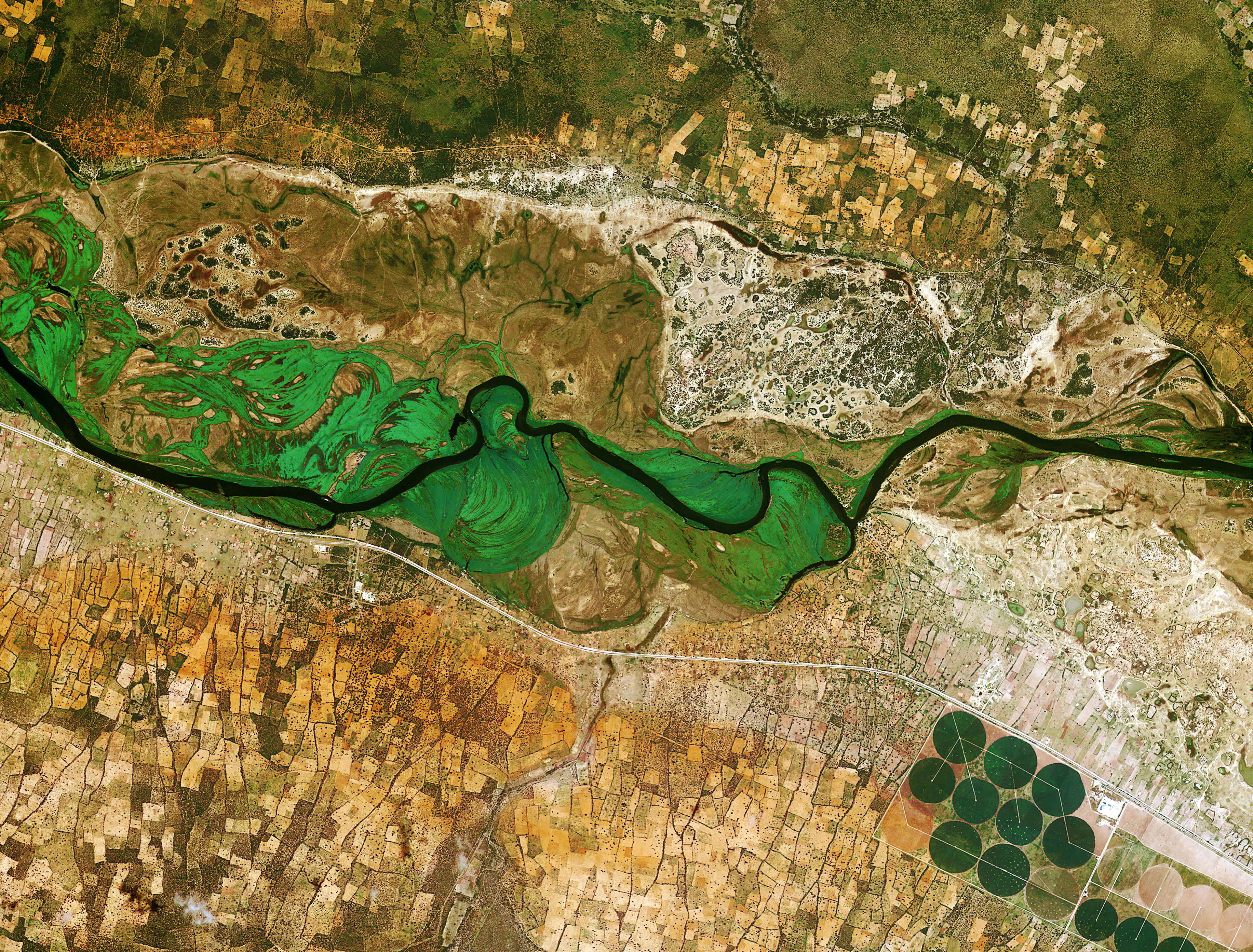 Satellite image of the Okavango River between Namibia and Angola. Vegetation is visible in green, villages and buildings in white and soil in orange. The circles are fields with a diameter of 600 meters. Photo: KARI/ESA

"Neither UNOSAT or any other UN organization currently have satellites of their own. Hence, the UN Family relies to a great degree on freely available satellite data, for example from the European Union's Copernicus Program", Hagen says.

Freely available satellite data often do not have high enough coverage or high enough image resolution in geographical areas important to the UN's efforts. Therefore the organization must often purchase costly satellite data for their work in poorer countries.

"Several UN organzations, including UNOSAT, UNDP and UNICEF are therefore very happy with Norway's agreement of satellite data purchase, since they know that such high resolution images also can support a wide range of UN's work, in addition to the conservation of tropical forest," says Hagen.

Because satellites play such a central role in the realization of Agenda 2030, the UN has also established a Space 2030 Agenda to show how satellites and space can help reach the 17 Goals for Sustainable Development.

Norway's emphasis in the UN Space 2030 Agenda is: To promote and support the use of space in the global work for a sustainable ocean economy. To advocate for and support the use of space activities to increase the access to broadband communication for developing countries and the Arctic, and to increase access to satellite data and other information from space for developing countries.