NorSat-3, launched successfully on the 29th of April 2021, will improve monitoring ship traffic from space.

NorSat-3 will contribute to maintain Norway's constellation of satellites for monitoring maritime traffic. The previously launched four microsatellites of this constellation have all exceeded their life expectancy in space.

The new Norwegian satellite launched successfully from the European spaceport in Kourou in French Guyana at 03.50 Central European Time on the 29th of April 2021.

NorSat-3 is a new microsatellite which, similarly to its predecessors, is equipped with an AIS receiver to detect signals from ships at sea.

However, AIS signals alone may not give a complete view of maritime traffic. Military vessels are not obliged to use AIS, and technical errors, interference, signal manipulation and AIS transponders that have been switched off are possible problem areas. Including signals from navigation radars will contribute to making the situational image more complete.

NorSat-3 is more advanced than its predecessors, because in addition to the AIS receiver, it carries an experimental navigation radar detector (NRD). The NRD is primarily a technology demonstrator, but will also contribute to a more comprehensive image of the traffic at sea.

This new payload will detect ships by detecting and locating signals from civilian navigation radars. Thus, the Norwegian Coastal Administration will be able to verify the AIS information and detect ships that are not emitting AIS signals.

- The Norwegian maritime authorities have never had a more comprehensive view of the ship traffic in Norwegian waters, around Svalbard, and in the rest of the Arctic, including the Northeast Passage, says Arve Dimmen, Director for navigation technology and maritime services at the Norwegian Coastal Administration.

- AIS data is a key tool for the Norwegian Coastal Administration to monitor and control vessel traffic to increase safety at sea. Our AIS satellites must be replaced regularly in order to maintain this ability to monitor ship traffic in Norwegian waters in the future. All four other Norwegian microsatellites in orbit have already surpasses their minimum expected lifespan. This is why NorSat-3 is so important, says Dimmen.

Moreover, the Norwegian Joint Rescue Coordination Centres need to quickly identify and locate ships in emergency, and nearby ships that can assist with search and rescue. The Norwegian Fisheries Directorate uses maritime surveillance to control fishing activities and detect ships that are transferring catches at sea.

- Norway has been a pioneer in using small satellites to meet important societal needs, particularly in maritime surveillance, says Lene Marthinsen, project manager for satellites at the Norwegian Space Agency.

- Together with UTIAS that developed the satellite bus, we have aimed for a microspace philosophy, which allows for more cost effective and faster development, includes the extensive use of commercial off-the-shelf components, and a somewhat different test regimen than in traditional satellite programs, Marthinsen says.

The Norwegian Coastal Administration is the owner of NorSat-3, with the Norwegian Space Agency managing the project. The NRD antenna and receiver have been supplied by the FFI and developed in cooperation with Kongsberg Seatex, the French space agency CNES and the German producer Ilfa.

- The development of the NRD instrument has been a challenging task, with contributions from several areas of competency at FFI, says Richard B. Olsen, head of research at FFI.

Olsen adds that the project is part of the development of Norway's national space capabilities according to the long term plans of the Norwegian defense sector.

- An improved situational awareness in the north is an important part of these plans, and the NRD instrument demonstrates technology that is promising for such purposes. The launch of NorSat-3 is an important milestone, and we are now looking forward to collecting data for experimentation, evaluation and future operations together with the Norwegian military, the Norwegian Coastal Administration and the Norwegian Space Agency, Olsen says.

The development of NorSat-3 has cost 80 million Norwegian kroner. Of this sum, NOK 30 million has been financed by the Norwegian Coastal Administration, including the satellite itself, the launch and the AIS sensor.

The remaining NOK 50 million are financed by the Norwegian Ministry of Defence and includes mainly the development of the navigation radar detector. The price tag for the satellite is small for the space sector, and thus the Norwegian developed microsatellites garner international attention.

The satellite bus for NorSat-3 has been developed and integrated by the University of Toronto Institute of Aerospace Studies - Space Flight Laboratory (UTIAS-SFL) and will be operated by Statsat AS in Oslo.

AIS is an automatic identification system introduced by UN's International Marine Organization to increase maritime safety for both ships and the environment, and to improve regulation and monitoring of ship traffic.

AIS transponders in ships emit information about the vessel's identity, position, speed and bearing. These data are received by the Norwegian Coastal Administration's land based AIS chain, called AIS Norway, consisting of 50 base stations along the coast. AIS signals are also detected by the Norwegian national satellites AISSat-1 and -2, as well as NorSat-1, -2 and -3.

This satellite was primarily intended as a technology demonstrator to show that it was possible to receive AIS signals in orbit, but the satellite functioned so well that it is today an operational satellite. The success with AISSat-1 led to the development of a twin satellite, AISSat-2, launched on the 8th of July 2014. A third twin, AISSat-3, was unfortunately lost during a launch from Russia in November 2017. 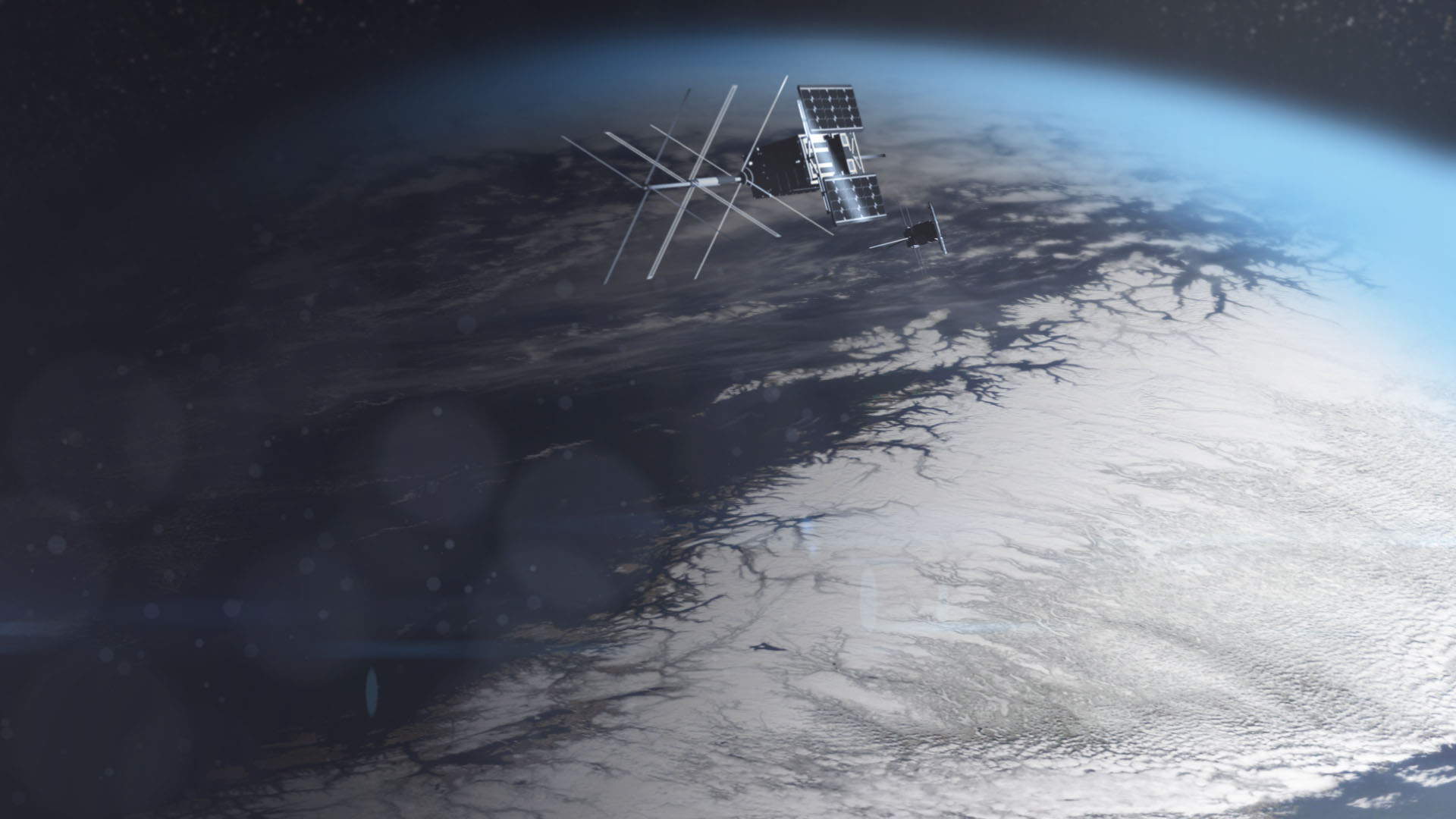 Illustration of NorSat-1 (in the background) and NorSat-2 in orbit above the Lofoten islands.

NorSat-1 carries a Swiss instrument for solar research and a Norwegian Langmuir probe for research on the aurora borealis. NorSat-2 tests VDES – a new international standard for two way communication at sea. Both these satellites were launched on the 14th of July 2017.