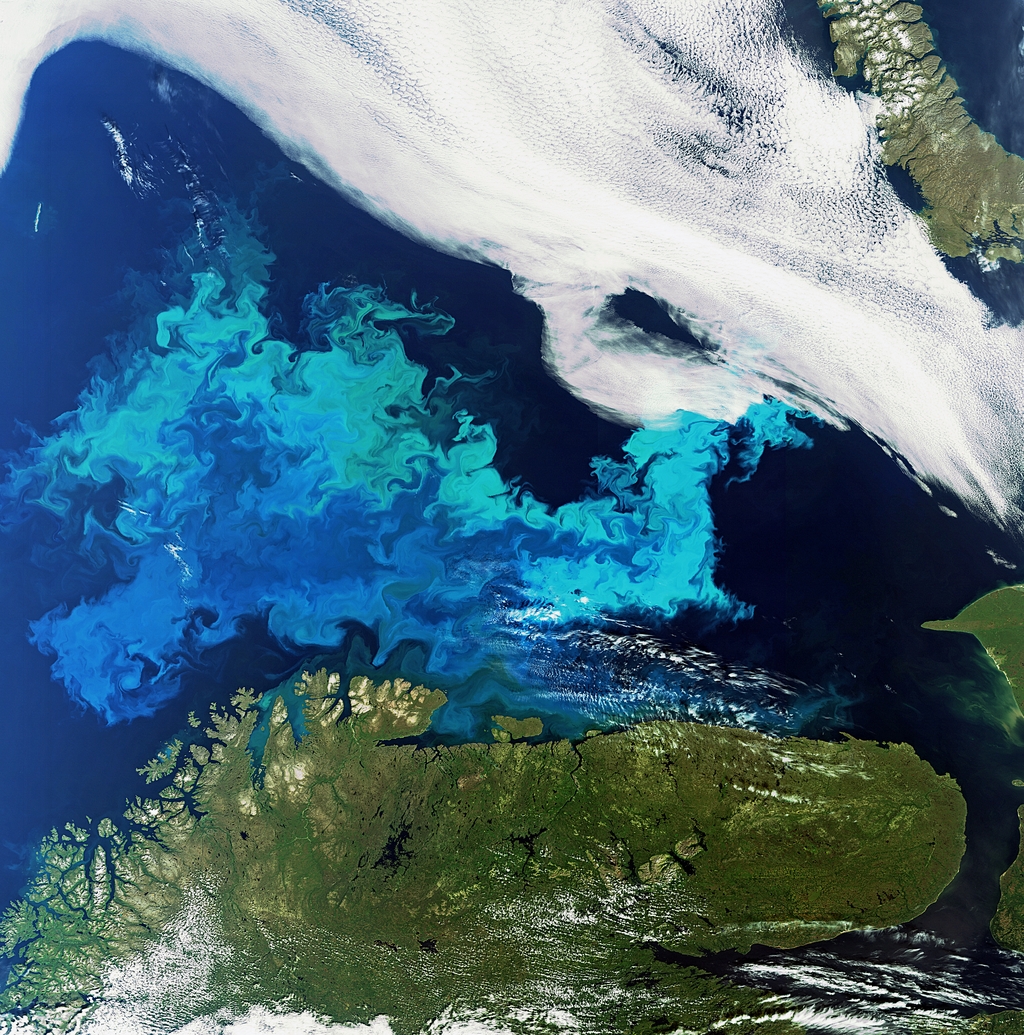 The satellite image shows an algal bloom in the sea off the coast of Northern Norway. Credit: ESA.

Like many other countries, Norway is now using Earth observation satellites more and more.

Between 2007 and 2010, the number of Norwegian researchers and research institutes using earth observation satellites increased by more than 55%. And more and more public services, organisations and companies in Norway, from sectors such as fisheries, the oil and gas industry, tourism, power and transport, have discovered how useful the data provided by Earth observation satellites can be.

Knowledge of the polar regions is an essential piece in the puzzle of understanding what happens when climate change occurs at the global level. The Earth observation satellite CryoSat is an important part of this work. The ice satellite was launched in 2010.

CryoSat measures the thickness of land and sea ice in the Arctic and Antarctic. Combined with what we know about the extent of the ice, these data will reveal how much ice is actually left in the polar regions, and how quickly it is disappearing. Several Norwegian research institutes, including the Nansen Centre in Bergen and the Norwegian Polar Institute, will use the data from CryoSat in their work on ice and the climate.

The super-advanced GOCE satellite (Gravity field and steady-state Ocean Circulation Explorer) measures the Earth's gravity field with extreme accuracy. It was launched in 2009.

Knowledge about the Earth's gravity field is essential if we are to be able to measure heights exactly. We need these measurements when we design roads, buildings and other structures, and in order to determine exactly by how much the sea level rises every year.

The Norwegian Mapping Authority and the Norwegian University of Life Sciences are using data from GOCE to map gravity fields and ocean currents in the High North. The Nansen Centre in Bergen is involved in several projects that use GOCE's data for oceanographic research.

SMOS (Soil Moisture and Ocean Salinity) measures moisture in the soil on land, and salinity at the surface of the sea. This is important, since it enables us to detect droughts, protect vegetation and agriculture, study how climate change affects the major ocean currents, and what happens to the oceans when more ice melts and river runoff increases. The Nansen Centre is involved in validating and using the data from SMOS.

The Norwegian Institute for Air Research is studying how information from SMOS can provide a clearer picture of soil moisture in Norway and the High North. SMOS was launched in 2010.

Radarsat-1 and Radarsat-2 are two Canadian radar satellites that have been in orbit since 1995 and 2007.

Norway uses data from these satellites for many purposes, such as monitoring marine traffic, fishery resources, maritime boundaries, detecting oil spills from ships or offshore installations, and mapping ice and icebergs around Svalbard.

The Norwegian CryoClim project is developing services for monitoring the cryosphere, i.e. the sea ice, snow cover and glaciers in Norway and Svalbard. CryoClim will combine data from several different optical, meteorological and radar satellites, including Radarsat-1 and Radarsat-2.